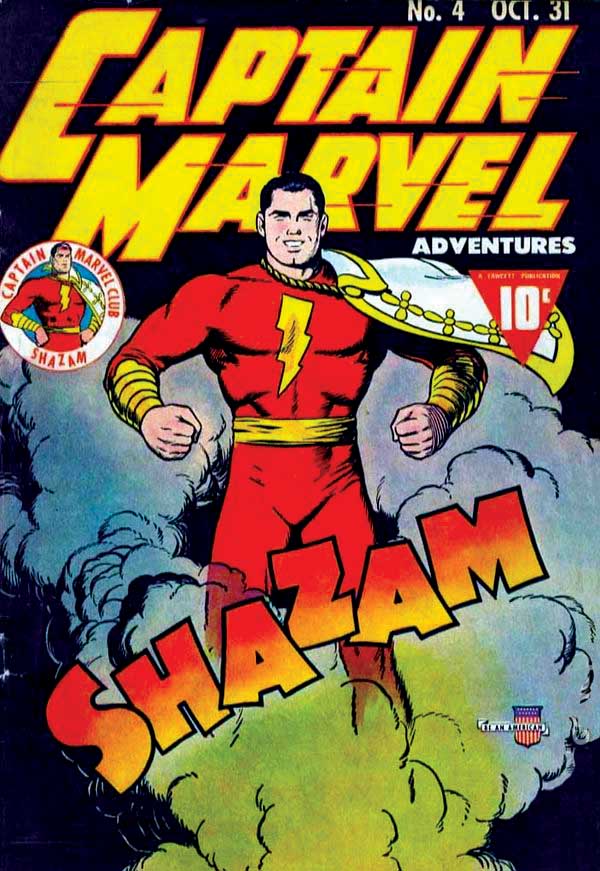 EDITOR’S NOTE: We all know the popularity of super-hero movies right now. One highly publicized film coming up is called SHAZAM! It is loosely based upon a comic book character called Captain Marvel who was very popular in comic books in the 1940s (called the Golden Age) and later in the ’70s in the TV series SHAZAM! (This Captain Marvel is an older version, not related to Marvel Comic’s movie character.)

The SHAZAM Captain Marvel’s alter ego is an orphaned boy named Billy Batson, who because of his goodness, is chosen to receive super powers by an ancient wizard. Whenever Billy calls upon the wizard’s name, “Shazam!” he is transformed by magic lightning into adult superhero, Captain Marvel. Later Cap is joined by Mary Marvel and Captain Marvel Junior (not Cap’s son) to form the Marvel Family.

It is a known fact, C.C. Beck, one of Captain Marvel’s creators, was the son of a minister. Although Beck denies having anything to do with thinking up these stories, many Christian comic readers have noticed that numerous 1940s and early ’50s stories appear to have examples of Christian allusions and symbolism in them. Writer and comics fan, John G. Pierce takes a look at these possible references in this new article.

Over the decades, many writers have explored the Messianic implications of super-heroes, especially Superman, in articles and even books.  But in a larger sense, almost any heroic figure can be seen as having Christ imagery, as they are people whose primary missions are to save others in a temporal and physical (but not spiritual) senses.  But what about super-heroes as Christian images?  That is to say, what about heroes who might symbolize being a Christian rather than being a Christ figure?

There are several who fit that particular image, with perhaps the most prominent being the original Captain Marvel (along with his Family).  Consider this: these characters receive their powers from the sky. They invoke those powers via what might be regarded as prayers: Billy and Mary Batson’s one-word invocation of “Shazam”, Freddy Freeman’s two-word “Captain Marvel.”

Not only did the original CM play somewhat of a Christian role,  many of his stories contained moral values which, while not necessarily exclusively Christian, definitely can be seen as part of living out the Way.

For instance, in Captain Marvel Adventures #90, Cap’s talking tiger friend, Mr. Tawny, moved into a new neighborhood, only to be met with suspicion and prejudice. (Apparently no tigers had lived there before.)  But Cap supported Tawny (“If there’s anything I hate most, it’s discrimination and prejudice against anybody or anything!”, declared Cap).

Prejudice also played a role in issue #113’s “The Imperfect Perfection,” in which Billy visited a town where everything had to be just so, and anybody who didn’t resemble a Greek statue was shunned.  Cap handled this by declaring that every man in town had to be as a tall as he was, and proceeded to deal sharply with all of the men who weren’t! The local bigots were convicted and convinced.

In #119’s “The Man Who Thought Aloud”, one Jasper Sauer, who always had negative thoughts, was visited by a gnome who was the “collector of all the bad thoughts that you humans have”. The gnome placed on Jasper the Curse of Spoken Thoughts, causing him to utter aloud everything he thought. When Cap tried to intervene, the gnome put the same curse on him..  Soon a rather plump woman approached, but – as a caption informed readers – “Captain Marvel never has bad thoughts.” So when the woman passed, Cap’s spoken thought was, “What a jolly and pleasing face that lady has!” Sauer ended up realizing that it was his own thoughts which caused him trouble, and the gnome removed the curse from both men. This was an obvious application of Proverbs 23:7, “….for as he thinks within himself, so he is.”  (NASB)

It is worth noting that Cap sometimes addressed his archfoe, Dr. Sivana, as a “wicked old sinner.”  The word “sin” turns up in the names of other opponents, the Seven Deadly Sins (sometimes “Enemies”),  And yet another foe, King Kull, once used “sin bombs” to “unleash the sin” in human beings, clearly indicating (as does Scripture) that sin is already present in human hearts.

And finally we might take note of the foe whom the Marvel Family fought only once in the Golden Age, but who is now a major character at DC, Black Adam.  Black Adam was Old Shazam’s first champion, but he turned evil, and so was cast out (banished to the farthest star) by his benefactor, thus calling to mind the casting out of Satan by God.  It would be easy to connect Adam’s pointed ears with popular depictions of Lucifer.

There are just some of the numerous examples of Christian symbolism and allusions in the Golden Age Captain Marvel stories!

Writer John G. Pierce, born in 1947, has been a comics fan since 1955 and a Christian since 1962.  He spent 38 years as a public school teacher, and is now in his 11th year as a substitute teacher in a Christian school, as well as having been an adjunct college professor, having taught home-schoolers, and he has taught numerous Sunday School classes and Bible studies.  He is also a professional free-lance writer, especially on the topic of Captain Marvel, and he speaks four languages.  John and his wife Karen reside in Galloway, OH just outside Columbus.

Reprints of Golden Age Captain Marvel stories are available in book form through some online retailers such as Amazon.com.  Search under “Captain Marvel Adventures” and “Shazam.” Please note, however, newer stories on the character do not include Christian allusions or symbolism.  Shop carefully.

Read Michael Foust’s review of the new SHAZAM! movie here at our website.

January 20, 2019
You are going to send email to
Move Comment